Walking along the curving paths of the St. Olaf prairie on a sunny spring afternoon, I see much evidence of human presence if I take the time to look: there are bumps and footprints on the ground from joggers and bikes that overtook the mud, seemingly abandoned little orange flags that mark a sample site for some research project, expansive charred remains from a controlled burn, and scattered pairs of bluebird nest boxes that stand above the prairie grasses. On such a nice day, I am unlikely to feel alone during my solitary stroll. The cross-country team, a cyclist or two, and a handful of jogging students, faculty, and locals share the paths. Families move at a slower pace with their children and dogs. Students checking the bluebird boxes or assisting with a natural lands tour for grade school students work busily in the tall grasses. There is an undeniable sense of human integration with this “natural” space.

The spring of 2013 marks the twenty-fourth anniversary of the “establishment” of the St. Olaf prairie. While our prairie serves the school as a resource for education, research, and recreation, it also represents an attempt at restoring some of the farmland owned by the college back to a native ecosystem.[1] The history of locals’ relationship with the land where the prairie now stands tells us about how people’s valuing of the prairie has changed as their use of the land changed over time. In order to understand the relationships that the successive groups of settlers had with the land, I will first look at the geographic events that shaped the land at which they arrived.

Going back to around 13,500 years ago, the majority of what is now Northfield was covered by glacial ice.[2] The hills in the area are terminal moraine, marking where the glacier ended its advance.[3] As the glaciers retreated, open spruce forest overtook the land that eventually became more dense and characteristic of a modern boreal forest; evidence suggests the eventual presence of black ash, which indicates that the climate became more moderate.[4] Around 10,500 years ago, the spruce forest retreated northward and was replaced by a coniferous-deciduous forest of pine, birch, and elder.[5] 9,000 years ago, an oak-elm forest arrived with climatic warming until 7,500 years ago when open prairie became dominant.[6] Oak woodland returned around 5,000 years ago.[7] The region’s native forest is around 500 years old and is referred to as “the Big Woods”.[8] The Cannon River demarcated the edge of the Big Woods, which covered 2/3 of what is now Rice County to the West (the “St. Olaf” side of the river).[9]

People first appeared around 12,000 years ago during the Paleoindian period. There is archeological evidence of the Archaic Tradition in Rice County and Woodland Tradition to the west.[10] They lived in the dense spruce forest inhabited by animal species such as mastodons and giant beavers.[11] As the woodland encroached on the prairie, bison became less plentiful.[12]

The Dakota lived in the general area after the Paleo-Indians, but there is an absence of documented Indian archaeological sites. This is likely due to the lack of lakes and wetlands where villages would typically be located.[13] In the early- to mid-19th century four defined bands of the Dakota lived in the Minnesota region, the closest of which would have been the Wahpekute, who hunted between the Des Moines and Cannon Rivers.[14] Their villages were located on the prairie border and they sustained themselves on bison, deer, duck, geese, muskrats, and turtles as well as some farming, cultivating corn and a few other vegetables.[15] The native village system of shifting agriculture and hunting-gathering activities would eventually be displaced by a system of household agricultural units functioning within fixed property boundaries which, along with the logging necessary for establishing a city, would have significant ecological consequences.[16]

In 1838, Joseph N. Nicollet explored the Northfield area while mapping the region.[17] John W. North settled the Northfield area in 1855.[18] The Dakota were still present in the general region after Northfield’s establishment, and Northfield residents often remarked on Dakota passing through after the city was established in 1856.[19] As Northfield developed, its Rural Improvement Society strove to fulfill an aesthetic vision of the city – tree-lined streets and grassy lawns – by manipulating the physical landscape to establish an “ordered natural beauty”.[20] During the mid-1860s, a large migration of Norwegian immigrants to the Midwest coincided with the expansion of Midwestern settlements, primarily peasants looking for farmland and a means of recreating the lifestyle they were accustomed to back home with an improved socio-economic status.[21] The ethnic cuisine of these immigrants consisted of dishes that required potatoes as well as more common crops grown in America such as corn, soybeans, wheat, and milk, thus they raised crops and maintained dairy farms.[22]

Figure 2. Image from Dear Old Hill showing the construction of Thorson hall with the school farm in the background (pg. 155).

The principle crop in Minnesota during the 19th century was spring wheat and had been so since the beginning of cultivation in the area.[23] This is because spring wheat is well-adapted to Minnesotan soil and climate.[24] Wheat was the principal cereal and cash crop in most western pioneer communities, and farmers in the southern and western parts of the state suffered greatly during the locust invasion that lasted from 1873-1877.[25] In the 1880s the Northfield agricultural community shifted from wheat to dairy farming.[26] By 1914, 261 herds of purebred Holstein cattle roamed the Northfield vicinity.[27]

In 1874, Norwegian-American immigrant pastors in Northfield founded St. Olaf College on top of Manitou Heights, locally known as “The Hill.”[28] The main campus building, Old Main, was constructed in 1878 and prevented westward development of Northfield for the next 50 years.[29] By 1916, there were 601 students at St. Olaf and 3,600 Northfield residents.[30] By 1922, St. Olaf had 900 students.[31] In 1906, the school purchased twenty-two acres of land where Thorson Hall now stands for $1,800, and a barn for the campus farm was built that same year.[32] The farm provided milk and meat to the school cafeteria and the school had its own homemade ice cream; in a nutshell, St. Olaf was “a self-supporting, farm based college.”[33] In 1910, the college acquired thirty-nine acres north and west of the campus.[34] St. Olaf purchased most of the farmland from Northfield farming families, including the Gills and the Lashbrooks.[35]

Figure 3. Photo of the Black-eyed Susan monoculture in the St. Olaf prairie taken during its early years. Photo courtesy of Gene Bakko.

Figure 4. Professor Bakko standing in a Yarrow monoculture in the St. Olaf prairie during its earlier years. Photo courtesy of Gene Bakko. 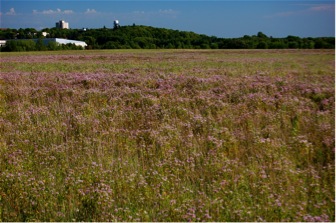 The college currently owns almost 700 acres of farmland adjacent to the campus; nearly half of it was placed in the Natural Lands program in order to restore native habitats such as prairie, woodlands, and wetlands.[36] Out of the converted farmland acreage, 150 acres are reconstructed tallgrass prairie.[37] Previously, the land that is now the prairie was farmed in corn for decades.[38] Initially, then Professor of Biology Eugene Bakko applied for the entirety of the lands around the Skoglund and Tostrud complex to be put into the Natural Lands program, but the Physical Education Department noted that boxing the campus in with protected native habitat would mean there would be no opportunity for possible future expansion.[39]

The idea for the Natural Lands program originally came from St. Olaf student David Laudine, ’81, who helped plant the first attempt at a school prairie (about two acres) which was not maintained and eventually forgotten.[40] In 1985, the USDA developed a five-year agricultural plan for their Conservation Reserve Program into which the college put some of its farmland.[41] At the time, farmers were renting St. Olaf farmland for $75 an acre, so the government provided the college with a hefty stipend for the land to be put out of agricultural use and restored to native habitat in a permanent easement.[42]

Figure 6. A photo of a Michigan Lily in St. Olaf prairie, a sign of the prairie’s maturation. Photo courtesy of Gene Bakko.

In 1989, some St. Olaf faculty and students planted the first section of prairie; 10 species of grasses and between 25-35 species of forbs were initially sown.[43] The Oles involved sowed the seeds according to the amount of moisture each species naturally grows in because of the variable terrain, with xeric (scrub) plants sown at higher points, mesic (moderate) plants sown along the sides, and hydric (wetland) plants sown at lower points.[44] This practice is referred to as “sculpting” in landscape ecology.[45] Over the first few years, plant species often appeared on the prairie in monoculture meaning one species would dominate the landscape. Some of the monocultures that have been documented on the St. Olaf prairie include black-eyed susans, yarrow, and monarda.[46] As the prairie matured, species such as the Michigan Lily appeared in lesser abundance in later years.[47] However, with around 50 plant species sown during the initial planting, the biodiversity of restored prairies are significantly less than that of intact prairies that could contain up to 350 plant species.[48] Management practices such as controlled burns, mowing, seed sowing, and invasive species removal are used to maintain the health of the prairie.[49] 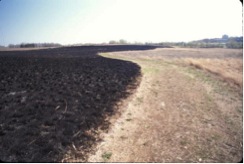 Figure 8. Sequence of three photos showing prairie immediately after burn, after 1 week, and after 3 weeks. Photo courtesy of Gene Bakko.

Dr. Bakko, the original Curator of the Natural Lands, retired in 2009 and the position was handed to Professor Kathleen Shea because of her deep involvement in the establishment of the natural lands, working alongside Dr. Bakko and the other faculty and students involved in its management.[50] Professor Shea is the current Curator and hires 3-4 students a year to assist in managing the Natural Lands.[51]

At this point in history, prairie only makes up 1% of the land in Minnesota.[52] Along with providing a resource for education, research, and recreation to the St. Olaf community, the Natural Lands were created as a means of restoring lost habitat native to Minnesota. It is interesting to note that, strictly speaking, the establishment of the St. Olaf prairie did not restore habitat that had existed immediately before the land was turned to agriculture, as there is no evidence suggesting that a prairie dominated this side of the Cannon River before the settlers arrived. The restoration of St. Olaf farmland to a habitat indigenous to Minnesota reflects a larger cultural desire to restore the Midwestern prairieland which represents the Midwest pre-settlement. This pre-settlement ideal resembles the land ethic proposed by the renowned conservationist Aldo Leopold in the 20th century.[53] At this point in the environmental history of the St. Olaf prairie, its cultural significance as a precious resource to Minnesotans and worthy of government protection has eclipsed its economic significance as desirable farmland and real estate. While this kind of cultural phenomenon may seem unheard of, it is not unique to Minnesotan environmental history has been documented in other parts of the United States as well.[54]

[2][2] Scott Anfinson, “Giants in the Earth Revisited: The Archaeology of Northfield,” in Northfield: The History and Architecture of a Community. (Northfield: Northfield Heritage Preservation Commission, 1999), 38.

[9] “Introduction,” in Northfield: The History and Architecture of a Community. (Northfield: Northfield Heritage Preservation Commission, 1999), 2.

Afinson, Scott. “Giants in the Earth Revisited: The Archaeology of Northfield.” In Northfield, 38-43.

Clark, Clifford. “Evolution of a Community.” In Northfield, 4-19.

Cronon, William. “That Wilderness Should Turn a Mart.” Chap. 8 in Changes in the Land: Indians, Colonists, and the Ecology of New England, New York: Hill and Wang, 1983.